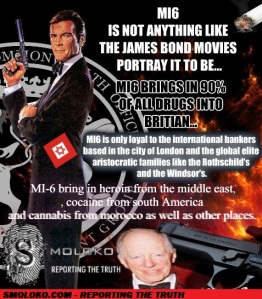 “MI6 bring in heroin from the middle east, cocaine from south America and cannabis from morocco as well as other places. British intelligence also designed and created the drug LSD in the 1950’s through places like the Tavistock Institute in London. By the 1960’s MI5, MI6 and the CIA were using LSD as a weapon against the angry protestors of the sixties and turned them into ‘flower children’ who were too tripped out to organise a revolution.” James Casbolt